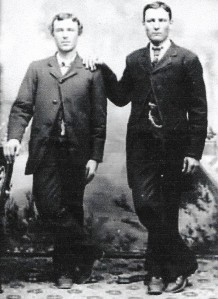 This weeks prompt for 52 Ancestors is Family Legends.   Right away I thought of what  my Uncle Bill Lyons would tell us when we were young.   He said we were related to Jesse and Frank James, the infamous outlaws.  Uncle Bill was the oldest in my dad’s family and seemed to know the most about family history.  Still, it was hard to believe and as we grew up, we believed it less and less.  When I became interested in genealogy, I discovered that my 2nd great- grandmother was Mary Ann James, married to Columbus Perry Ashlin, so there was the James name.   However that did not prove any relationship and I really needed to investigate this James family.  I proved to be a gargantuan task as the James family lines are huge!  It will take me years of research to complete, for sure!

While researching at the Mormon History Library in Salt Lake City a couple years ago, I found a whole book written on the James Family!  It is titled “Montgomery and James of southwest Virginia” by David B. Trimble (see Sources).  This volume of genealogy in one of four written as an expansion of Southwest Virginia Families, published in 1974.    The book basically gives the genealogy  and families of three brothers, Samuel, Thomas and John James who were born in Virginia in the early 1700’s.  I was able to establish my ancestry connection with Samuel James who was born 19 November of 1722 and married Mildred Taliaferro in 1740.

One of Samuel and Mildred’s sons, Spencer James (also known as James Spencer James), married Frances Davis and their daughter Phoebe Byrd James, born in 1797, married Chesley Harrison Ashlin.  Chesley and Phoebe are my 3rd great-grandparents, being the parents of Columbus Perry Ashlin.  So here I found my 2nd Great-grandfather, Columbus was also descended from a James as was his wife, Mary Ann James!  Mary Ann was the daughter of Thompson B. James and Susannah J Porter.  Thompson B. James was the son of Ezekial James and  Frances James, the sister of Phoebe Byrd James.  It all sounds confusing but my 2nd great-grandparents, Columbus Ashlin and Mary Ann James were actually distant cousins!  So now I established that there are indeed a lot of James ancestors in my tree!   But how did they relate to Jesse and Frank James?  I still had my doubts!

Then I stumbled on a web site entitled “Stray Leaves” by Eric James as I was researching the ancestry of Jesse and Frank James.  This web site was surprising and very well documented!  It is based on 10 years of research and uncovered 35,000 plus known James families and relations!  The Story of the James Family in American spans 350 years and started with John James, an immigrant from Carnarvon, Wales to Colonial Virginia arriving before 1650.  It also traced the James heritage back to William the Conqueror, Edward I “Longshanks”,  Edward II and Edward III of England.  There is much more on the James family ancestry that one can explore.  However, from what I could determine, some James family stayed in Virginia (which would be my ancestors) and others moved on to Kentucky.  Many were Baptist ministers as was Robert Sallee James, Jesse and Frank’s father. 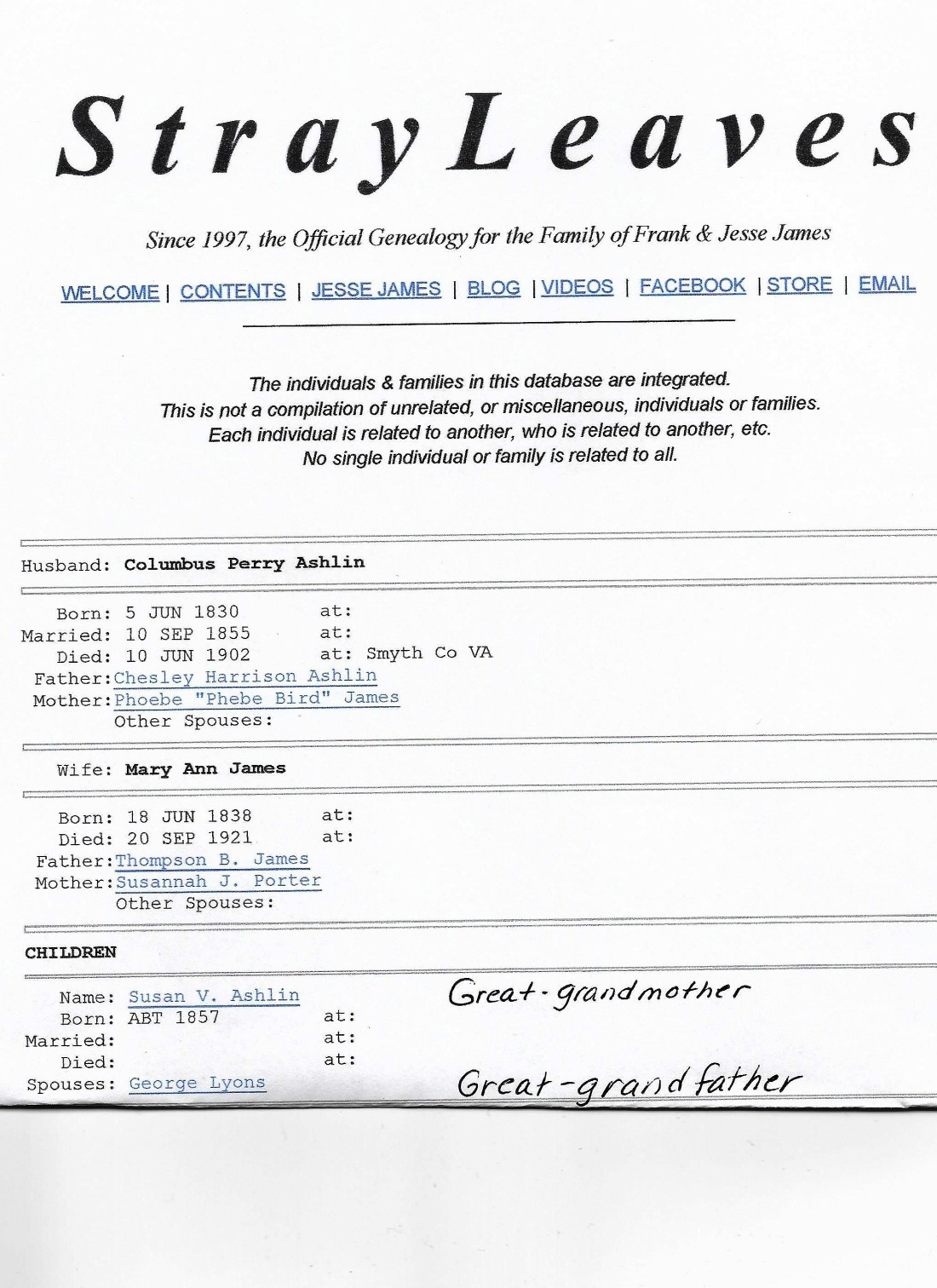 4 thoughts on “Are We Related to Jesse and Frank James?”