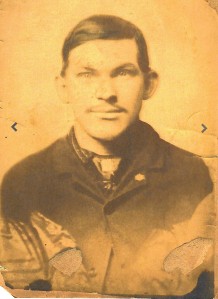 This is my favorite picture of my great-grandfather, William Domman Swanson!  He was the father of my grandmother, Cammie Swanson Lyons, my dad’s mother.  (See last weeks blog!)  While browsing through Lynchburg, Virginia census records, I found his 1910 Census listing his occupation as a fireman and I thought, now there may be a story and what a story it turned out to be!  In the above picture, he appears to be in uniform with an insignia so I am guessing the picture is from about 1906-7 when he first joined the Lynchburg Fire Department.

William was the son of John A. B. Swanson, a Confederate Civil War veteran and Mary Frances Burks.  He was born 22 May of 1862, the second year of the war and was the second of 13 children in the family.  The family lived in Amherst County, Virginia in a little town of Cool Well.

He married Cora Virginia Phillips in 1884 when he was just 21 and she was 17 and they had 11 children that I know of.   They moved around a lot, mostly in the Lynchburg, Virginia area and Amherst County.  Cora and her sisters and daughters were midwives and “healers”, attending to the sick with natural herbs and such.  It is said that the Swanson and Phillips families were German, Dutch and Irish with the “healing” side coming in through the Irish! 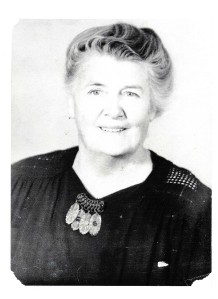 William did a lot of different jobs while raising the family and in 1900, he was working as an iron worker.  However, the family settled for good in Lynchburg in 1906 and on the 15th of March, 1906, William became a fireman with the Lynchburg Fire Department, working out of fire station #3.  They bought a home just down the street from the fire station.   William even had a gong in his home that sounded off whenever the fire alarm went off at the station.  That way, he could jump into his suit and run out to the street to catch the fire truck as it went by his house on the way to the fire!  I really think he loved the new career and was very dedicated as he stayed with the department until his death.

William had several narrow escapes from death during his fire-fighting career.  He was suffocated twice by smoke, doctors giving up hope for his life after the Academy of Music fire in Lynchburg.  He was also suffocated when the Southern railway tunnel in Rivermont burned and caved in.  But he persevered.

On September 28, 1926, his luck ran out.  Tragedy struck!  William died as the result of a tragic accident while on duty as a fireman.  I actually found the original newspaper stories recounting his accident.  It seems, William was eating dinner at his home when a fire alarm came in to headquarters and rang the gong in his home.  He jumped up from the table thinking he could catch one of the wagons as it passed his house on the corner of Pearl and Main streets.   It was a misty, rainy night and it was difficult to see.  As William searched for the lights of the fire wagon, he was almost blinded by the lights of what he thought was the fire wagon.  Quickly he stepped out to slow the wagon down to jump aboard but it wasn’t the lights of the wagon – it was the fire chief’s car!  The car only had about 10 feet to brake upon seeing William but the car skidded in a wide arc  and struck and swept William to one side while landing on the other side of the street.  William’s injuries were serious including a broken leg, several broken ribs, internal injuries and punctured lung and he was taken to the Lynchburg Hospital when he passed away 4 hours later.

The Lynchburg News reported the next day: “The call of duty, to which he had always responded, cost the life of William D. Swanson,  64-year-old veteran fireman last night when he was struck by the fire chief’s car near his home at about 7 o’clock.   The fire chief stated,  I do not believe he saw my car…as he had his eyes on one of the trucks behind me.”  The Captain stated that William’s service with the department had been “A-No-1.  He was a good man all of the way through.”  The article ends with this:  “The firemen at station No. 3 to which Mr. Swanson was attached and where he was held in unusually high esteem by his fellow workers, were this afternoon engaged in draping the front of the station with mourning.”   A touching tribute to my great-grandfather. 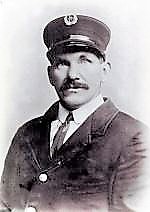 The City of Lynchburg erected a memorial for their firefighters killed in the line of duty in Miller Park  in 1995 and William’s name is engraved on the memorial statue. 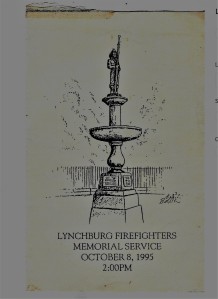 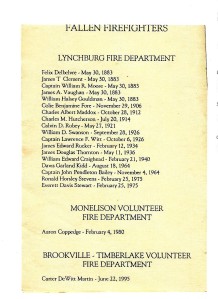 William was buried in Spring Hill Cemetery, Lynchburg on  October 1, 1926.  His beloved wife, Cora, joined him in 1945.  Although I live in Wisconsin, someday I want to make the trip to visit not only their graves but also to see the Fallen Firefighters Memorial.   His story touches my heart and inspires me to keep searching for the stories of our heritage to better understand where we came from! 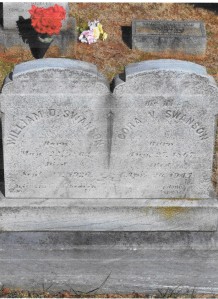 If any relative would like a copy of William and Cora’s more detailed family history, just contact me!  I am always happy to share my research!