I joined a genealogy challenge to post something about 52 ancestors in 52 weeks with genealogist Amy Johnson Crow.  Her prompts help to inspire us and this weeks prompt was longevity!  As I have been researching my father’s family, I found out that there really isn’t a lot of longevity and as a matter of fact, there was more tragedy in that family than would seem to be for a normal family!  So this week, I am going to reveal some of the misfortunes that plagued the family.  Longevity did not run in this family!  Before I forget, I also want to post an ancestry chart that may be helpful to refer to in the upcoming weeks and give you a sense of who we are related to and how.  This chart is for my father’s (LaFon Lyons) family.

Clarence Lyons, my grandfather, passed away at age 48 years in the Herman Keifer Hospital in Detroit, Michigan on 24 May 1939.  Cause of death was pulmonary Tuerculosis (3C, unfavorable) that he struggled with for 3 years and contributory cause was heart failure.  His wife, Cammie, not only lost her husband that year but one of her brothers died in July also.  It seems some years were very hard on the family.  Take 1928 for example, on Sep 26 of that year, Clarence and Cammie lost a baby named Rosemary and 2 days later, Cammie’s father, who was a fireman in Lynchburg, Virginia, was killed  after being struck accidentally by the fire chief’s car. (More on that story later)

LaFon’s oldest brother, my Uncle Bill, graduated from high school in Detroit and later graduated from a course in Mortuary Science and worked for Grosbeck Funeral home for 15 years.  He was also in the National Guard and in WWII served in the 182nd Field Artillery and 107th Observation Squadron.  In 1936, Bill married his first wife, Dorothy Bates and in 1937, their first son, William Lyons Jr was born.  The next year, Corry Clarence Lyons was born but died at 5 months old due to broncho-pneumonia and upper respiratory infection.  Then in 1939 of Nov, their 3rd son was born, Daniel McWayne Lyons.  Now more tragedy was in store for the family.

On May 10 of 1943, the body of Dannie Lyons, 3 years old, who had disappeared from his home in Mount Clemens, MI, was recovered from the Clinton River at Mt. Clemens.  The child’s body was discovered by two boys gathering driftwood along the river bank.  It was ruled a homicide as the child was forcibly drowned.  Dannie Lyons disappeared while his mother was shopping in a store below the family’s apartment.  Mrs. Lyons told officers a former woman roomer had threatened “to get even” because she had caused her arrest in connection with the theft of a coat.   A woman was arrested and held but later released and the case was never solved.

Bill and Dorothy had 2 more children, Gregory LaFon  and Susanne Adele but their marriage suffered and they divorced in 1947.  Oddly, Bill married Marion Norman Ashlin in 1949 who was divorced from Bill’s cousin, Robert C Ashlin.  As a matter of fact, Robert and Marion were the witnesses for Bill and Dorothy’s marriage!  Robert was the son of Samuel Ashlin who was a son of Columbus Ashlin – see past blogs about Columbus. Robert and Marion had tragedies in their marriage also!  Of their 5 children, they lost 2 – Leona Marion Ashlin died in infancy in 1932 and Robert L Ashlin  died at not quite 3 years old due to shock following trauma of being struck by an automobile! in 1939.

Bill did marry Marion and eventually they moved to Ironwood, MI and had 4 children – Ruth Jean Lyons Glickert, Marion (Penny) Lyons Waurio, Virginia Lyons and John Frank Lyons.  However, the misfortunes did not end as John Frank Lyons’s had a son Johnny Floyd Lyons who was killed when hit by a car while riding his bike at age 11!

LaFon’s other brother, Edwin McWayne Lyons was between Bill and LaFon in age.  Both Ed and LaFon had to quit high school when their father died and go to work to help support the family.  Bill was already married.  I know that LaFon was a truck driver and Ed worked in an auto factory as a paint sprayer according to the 1940 census.   In 1941, Ed married Lucille Kendrick in New Haven, MI.  He was 26 and Lucille was 20.  Her mother had died young at age 23.  Lucille was partially crippled and advised not to get pregnant but she did.  She died in childbirth along with her baby in 1942 at age 21.

Before my Aunt Coralie passed away, I had conversations with her about the family – she was the youngest sister of my dad, Bill and Ed.  Her story about Ed went something like this.  After his wife and child died, Ed didn’t care much for anything.  He was drafted into the army and had a date to report for duty.  On Sunday, the day before he was entering the service, he drove his motorcycle up to New Haven to say goodby to Lucille’s father and step-mother.  Ed had a very serious accident when he hit a loading dock with his motorcycle and broke many bones and had many injuries including a crushed chest.  It seemed he was dying so Grosbeck funeral home was sent for to pick up the body.  Grosbeck sent Ed’s brother, Bill (who worked for Grosbeck at the time), up with the wagon to pick up bodies–not knowing that the almost dead man turned out to be his own brother!  What a shock for Bill that must have been! Ed was sent to the hospital instead!  Ed was in the hospital for many months and it was over a year before he could walk again.   The doctor that treated him didn’t sign the release papers for the army because the doctor himself was drafted.  So Ed was listed as AWOL and it took months for Ed’s mother, Cammie, to straighten things out with the army!  Ed contracted tuberculosis and spent years in sanitariums for treatment.  He passed away in 1962 at age 46.  He was my favorite uncle and we corresponded back and forth by letter although I only got to meet him several times, I really loved him. 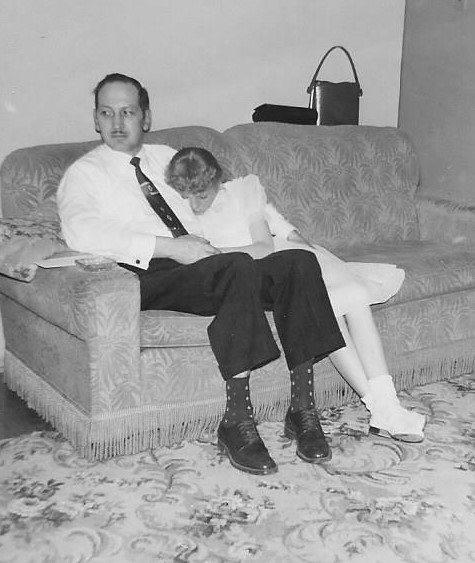 This is Uncle Ed and I in the 50’s.  It was taken on a family trip to Mount Clemens (Near Detroit).  We lived way at the western end of Upper Michigan and had to cross the Straits of Mackinaw by ferry back then before the Mackinaw Bridge was built.

In 1964, both my grandmother Cammie and my Uncle Bill passed away within a couple months of each other.  My uncle was just 50 years old and died of heart failure and advanced diabetes.  I was one of the last people to see him before he passed.

As I was doing more research, I found more misfortunes in my grandmother’s family.  She had a sister Gertrude who died of TB as age 23 leaving  behind an infant daughter.  Also 3, possibly 4, of her brothers died as infants.   My Grandfather’s sister, Mary Ann, and her husband Edward Bruehl, also lived in the Detroit area.  They adopted two daughters, Grace and Hope.  Sadly, Hope Mary Bruehl, died at age 10 due to a crushed chest and internal injuries to her heart and lungs when she was run over by a truck.

It really does seem to be an abnormal amount of tragedy in the Lyons family in the past.  I think it is important to share their stories which is one reason I had developed this interest in discovering the family history.  A few family stories spurred me to research more and more and start writing the family histories.  There is so much more to come so stay tuned each week!

2 thoughts on “Longevity? Not!”