This week’s prompt is “Valentine”  and I have chosen to write about my Aunt Dreama June Lyons Cranston Schultz who was born on Valentine’s Day.  We never called her Dreama – just Aunt June.  I have no idea where the name “Dreama” came from but a lot of people in my father’s family had unusual names!  Aunt June was my dad’s sister – he had 2 sisters (a third sister, Rosemary, died as an infant) and 2 brothers.  If you look back on earlier blogs, you will find more about the family.  I want to give you an introduction to Aunt June this week as she will be in the “heirloom and ghost story”  blog I plan for next week! 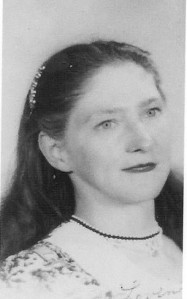 Aunt June was born in Lynchburg, Campbell County, Virginia on the 14th of February in 1922.  Her parents were Clarence Edward Lyons and Cammie Lyster (Swanson) Lyons.  At that time, the family was living at 602 Richmond Avenue in Lynchburg.  Her father, Clarence Lyons was a carpenter.  Dreama June was the first daughter in the family and had 3 older brothers, William Lilburn, Edwin McWayne, and LaFon Camlyn.  (See what I mean about unusual names!)

When June was about a year old, in 1923, the family moved to Detroit, Michigan.  The families of Clarence’s brother James and sister, Mary Ann moved with them, too.  Times were hard and they were seeking jobs in the auto industry in Detroit.    By 1930, the family was living in their home on St Aubins St. in the ninth ward of Detroit.  Clarence was working as a mechanic in Aeroplane Manufacturing.   Aunt June was 8 years old then.   Her sister Coralie Jean was born the next year in 1931.  Their father, Clarence died in 1939 of tuberculosis.  It must have been hard on the family as the boys had to quit school and work to help the family.  Aunt June was 17 at the time and still in high school.

I do know that Aunt June had mastoiditis as a child and lost her hearing.  She had to have several surgeries which restored part of her hearing and she wore hearing aids all the rest of her life.   My dad used to say that his mom spoiled June because she was so sickly as a child.   When she was 19, she married Francis Phillip Cranston.  Francis was 25 at the time and he was born in Ramsey, Minnesota, the son of Leroy Cranston and Helen DaPron.

In 1942, Aunt June and Francis had their first child, Phillip Domman Ralph Cranston.  Phillip had red hair and freckles and everyone just called him “Rusty”.

I know that Francis Cranston and Aunt June divorced but haven’t found the records yet.  Francis Cranston eventually moved to Sacramento, California and remarried to Alice Brewer Gardner in 1961.  Aunt June later married Ernest Wilber Schultz in 1957.  “Uncle Ernie” was born 26 November of 1924.  He was a World War II veteran and was a happy guy – always joking around.  He was the son of Ernest W Schultz and Dora J Sibbie.  They lived in Mount Clemens area mostly and also lived a few years in Upper Michigan near June’s brother LaFon.

In 1966, Aunt June’s son, Philip (Rusty), married Diana L Frohm in Clinton township and they had 5 children: Phillip Cranston Jr., John Robert-Kennedy Cranston, Clarence Edward-William Cranston, Dawn Cranston and Ernest Patrick-Wayne Cranston.  Philip died on May 30, 2015 at age 73.  He had worked for the Chrysler Corporation for over 27 years and was a member of the UAW.  He had 18 grandchildren.

Uncle Ernie died in 1988 in Mount Clemens, Michigan.   Eventually, Aunt June lived with her son’s family.  She worked as a dietician assistant at the former St. Joseph East hospital in Mount Clemens and later as a nurse’s aid at various nursing homes including Lakepointe Villa in Clinton township.  She was a member of the First Baptist Church of Mt. Clemens.  She also belonged to the Ladies Auxiliary of the VFW.  Aunt June passed away on May 6, 2007 at the Mount Clemens Regional Medical Center at age 85.

I remember her quite well.   She was a petite woman with reddish hair and was always nice to us children.  You always had to talk louder to her but she was very soft-spoken.  At times, she did cause some upset in the family but that is for next weeks blog!  Stay tuned!

Aunt June and her brother, my dad, LaFon Lyons, taken in Bessemer Michigan in 1970’s.