This week’s prompt was “weather” and that got me thinking of my second great-grandfather whose name was Joseph Cloud Lyon.   Now “Cloud” would relate to weather!  When I first discovered this ancestor, I really wondered why his middle name would be Cloud.  Was he Native American or was it a misspelling?  However, delving deeper, I found that his mother’s birth surname was Cloud and they used her surname as his middle name.  Since then, I have found other ancestors who had their mother’s surname as middle names.  It was more common than I realized!  I also noted that he used the surname “Lyon” not “Lyons”.  His son, my great grandfather, George, used “Lyons.”  I have found the surname Lyons and Lyon were used interchangeably for Joseph throughout my research.

Joseph Cloud Lyon was born in September of 1821 in Stokes County, North Carolina.  Stokes County is on the border with Virginia as indicated in the map below.

He was the son of James Alexander Lyon and Lucinda “Lucy” Cloud.   The first record I did find was on Find A Grave and a notation stated that he was a “Private, 4th Va infantry, CSA, Grandson of Col. Lyon, distinguished officer of the Revolutionary War and trusted conferee of George Washington”  So now I had some valuable clues – birth, death, burial and that Joseph was a Confederate war veteran and grandson of a Col. Lyon.  He was buried in the East End Cemetery in Wytheville, Wythe County, Virginia and died 17 Jan 1906.  He lived to 84 years old.  He also must have been about 40 years old when he fought in the Civil War.

As I researched, I found that the Cloud Family in Virginia and North Carolina was and is still, quite extensive!  Surely I will have to find out later how his mother Lucy fits into the Cloud family line.  In the 1850 Federal Census for his father James Lyon, I found the family was living in the 48th District in the county of Pulaski, Virginia.  His father was a tailor and he and Lucinda had 9 children listed, including Joseph, who was 24 years old.  Joseph and 2 of his brothers, Francis and Edmund, were “Wheelwrights.”   He had sisters named Mary, Eliza, Lucinda and Eugenia and 2 more brothers, James and George.  My great-grandfather may have been named after Joseph’s brother George!  Eugenia was the youngest at 12 years old.

At age 25, Joseph married Mary Lavalette Dudley on 14 September of 1851.  The marriage took place in Pulaski County, Virginia and was performed by J. G. Cecil, Minister.  Mary Lavalette  was the daughter of James Ransome Dudley and Jane Mallory Lyon.  She was born 16 September in Virginia and was 22 years old when she married Joseph.  I have started to trace the Dudley line and it extends back to the British Isles.  More information will be forthcoming in future blogs!

Nine years later, Joseph and Mary Lyons are living in Giles County, Virginia and their post office is White Gate but the little town was called Walker’s Creek.  According to the 1860 census, Joseph’s occupation is blacksmith and he is 34 and Mary is 32.  They have 5 children: Mary Elizabeth, age 9; William, 7; Susan, 6; and the twins, Lucinda (Lucy) and Catherine who are 3.  The value of their personal estate was $2370.  This census was taken on August 23, 1860 and 5 days later, on August 28, son George Edward Lyons, my great-grandfather,  was born!  Sadly, their son William died that year after the census.

Things were changing for the family as the Civil War began and Joseph entered the 4th Virginia Infantry and served in the 82nd Militia, 86th Militia and the 87th Militia.   I imagine Joseph’s skills as a blacksmith may have been an asset serving in the Militia.  Son Jessie was born in 1861 but died before 1870.  In 1862 of November,  a son, John Lee Lyons, was born and another son, Charles Guilford Lyons was born in 1864.  In 1867, Joseph’s father, James Alexander Lyons, died on the 2nd of January and 2 days later his mother, Lucinda Cloud Lyons dies!  It makes me wonder if the cause of their deaths was something like smallpox or another ailment as they died within 2 days of each other.

The family moved by 1870 and were living on a farm in Newbern Township, Pulaski County, Virginia.  Joseph was a blacksmith and 44 years old.  Mary was 42.  Two more children were listed, Willie Anna who was 2 and Thomas Houston, 1.  (Willie Anna Lyons later married William German Ashlin and were the subjects of one of my previous blogs) Catherine, one of the twins, was not listed and died before 1870.   Son William Lyons was also not listed and he would have been 17.  I have not found his records yet so he may have also died before 1870.  The rest of the children included Mary Elizabeth, Susan, Lucy, George, John, and Charles.  Also listed for the household were 3 boarders:  Robert Whittaker, 23 and Stuart Morton, 15, who were farm laborers; and, John F Colbe, born in Germany, age 30 and was a Cooper (barrel maker).

Two more children were born after this census.  They were Walter in 1873 and Emma Lockett Elevette Lyons in 1874.  In all, I counted 13 children born to Joseph and Mary.  Below is a Virginia County map which has some of the counties they lived in outlined in blue. 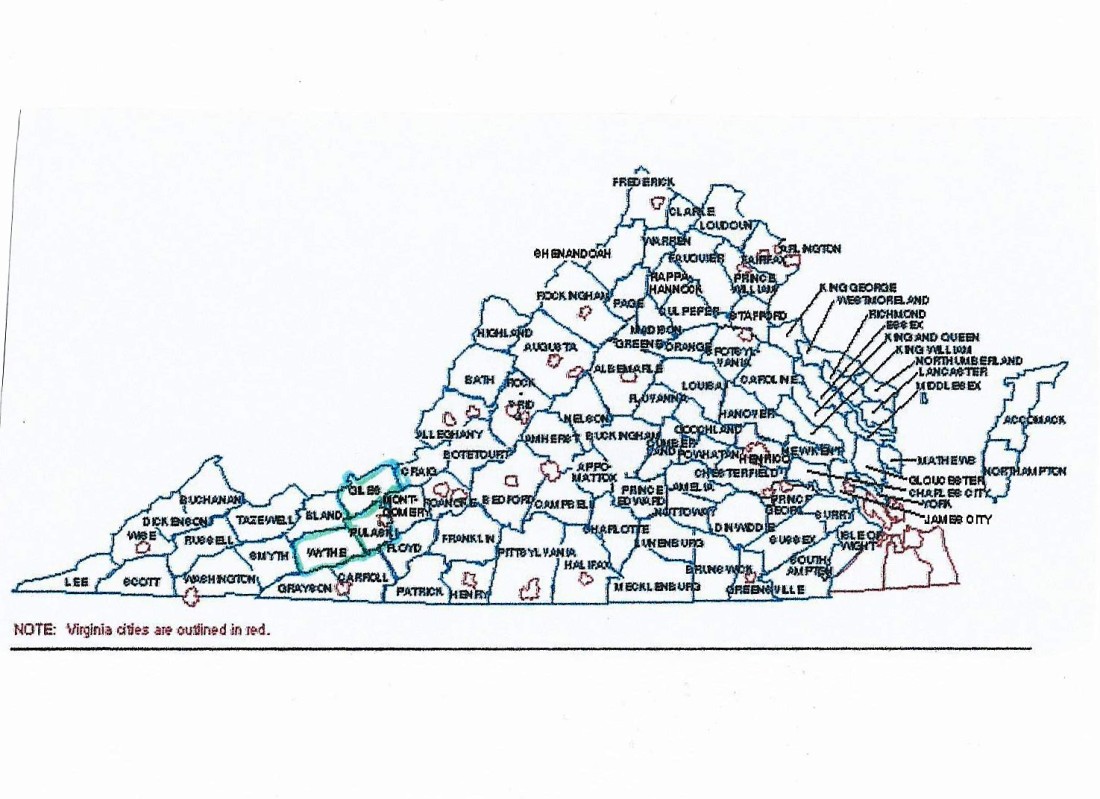 The next information I found was the death of Mary Lavalette Dudley Lyons in 1877 on February 6th.  She was buried in the East End Cemetery, Wytheville, Wythe County, VA.    Cause of death is unknown.  Sadly, she left behind small children.  In the 1880 Census, the family is still in Wytheville and Joseph is listed as widowed and 58 and a farmer.  Daughter Susan took over the housekeeping and she is 28.  Lucy is 23 and is a seamstress.  The 3 sons, George, John and Charles “work on the farm”.  Willie is just 12, Thomas is 10, Walter is 7 and Emma Locket is 6.

Also in 1880, on 10 Sep. , Joseph remarries at age 61.  He married a widow named Frances (Fannie) Jane Smith Pattison.  Fannie was the daughter of Larken Smith and Elizabeth Myer.  However, this marriage lasted only 7 years as Fannie died on 15 June of 1887.  Joseph was a widower once again.   Since the 1890 census records were destroyed by fire,  I have a gap in Joseph’s information.

In 1900, Joseph was listed as widowed and lived in Gladeville District in Wise County, VA with his daughter Mary Elizabeth Lyon, 45,  and grandson Joseph A Lyon, 10 years old  (evidentially named after him).  Joseph is again plying his trade as a blacksmith at age 78.   Joseph passed away on the 17th of January in 1906 in Norton, Norton City, VA at the age of 84.  He was buried in the East End Cemetery in Wytheville with Mary Lavalette Dudley Lyons, his first wife.   I was able to gather information on their children and will save some of those surprises for another blog!