This week’s prompt for 52 Ancestors in 52 Weeks is “Same Name”  and in our family, we have “Arthurs”.  There are at least 4 that I know of!  My Great-Uncle Kalle Arthur Knihtila, my uncle Arthur Richard Knihtila, my brother Arthur LaFon Lyons and his son, my nephew, Arthur Paull Lyons.   I guess it would be easy to call them Arthur 1, 2, 3, and 4 but you never know when another Arthur will pop up in my ancestry searchings!

Recently I had the immense pleasure of meeting two cousins who were visiting from Sweden, Borje and Leif.  As we were discussing our common ancestry, I could see that it was confusing to them as to which “Arthur” I was talking about!   So I am hoping this blog will help clear up the “Arthurs” in the family for them!  I would like to focus first on my Great-Uncle Kalle Arthur Knihtila and then his namesake, Arthur Richard Knihtila, my uncle. 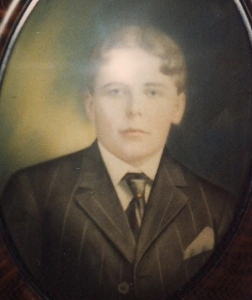 Kalle Arthur Knihtila was a biological brother of my grandfather, Richard Knihtila, and Emil Arvid Knihtila.   (Emil is the grandfather of Borje and Leif).  Kalle Arthur was born on 24 March 1888, in Simoniemi, Lappi, Finland and was the second son of John August Knihtila and Maria Kaisa Kestala (or Paakkari – some confusing records on Maria).   According to the grave marker in the Simo cemetery, their mother, Maria Kaisa Knihtila, died in 1899 at about age 37 or 38.  Kalle Arthur was just 11 years old, Richard was 13 and Emil was only 9 when their mother passed away.  Then sometime between 1902 and 1904, their father Johan August, who was about 43 years old in 1902, married Maria Evaliina Hepola who was 22 or 23 years younger than himself!   The new stepmother was only 5 years older than my grandfather Richard and 7 years older than Kalle Arthur.  I imagine there certainly could have been some conflict in the household!

By 1905, my grandfather Richard and a friend of his decided to immigrate to America and leave Finland and family behind.  They sailed to Portland, Maine and made their way to Calumet, Michigan at first to work in the mines.  (See former blog on “Sisu”)  The next year, Kalle Arthur decided to follow his brother Richard to America.  Kalle Arthur immigrated in 1906 with 2 friends, arriving in New York from Liverpool, England on March 10, 1906.  Arthur, as he was now called in America, was only 18 and arrived with $12 in his pocket.  His two friends that traveled with him were Matti Ristimaki, age 19, and Juho Mattila, age 18.  They traveled to Republic, Michigan to meet his brother Richard.

In tracing Arthur’s whereabouts, I found a postcard dated 1909 that my grandfather Richard sent to his brother.   Arthur was working in a mine and living in Ironwood, Michigan in Michigan’s western Upper Peninsula.   The 1910 Federal Census for Ironwood Ward 8, Gogebic County, Michigan, confirmed that he lived in a boarding house run by  Trace and Mary Walquist in Ironwood.  Arthur was 22 years old, single, not naturalized, and there were 29 boarders plus a servant listed in the boarding house.  At that time, chiefly because of the mining industry for iron ore and copper, these towns like Ironwood and Bessemer in the Gogebic Range were boom towns.  Many immigrants of Finnish, Swedish and other Scandinavian countries flocked to this area for the jobs.  Working in the underground mines was dangerous and unsafe without any electricity.  Miners wore candles on their hats for light.

By 1917, Arthur had to register for the World War I draft.  His draft card showed he was still in the Bessemer area not naturalized, and single.  He was 29 years old and living in Bessemer, Michigan.  He listed his occupation as a miner employed by the Colby Iron Mine Co. in Bessemer.  He listed his father as a dependent but claimed no exemptions from serving.  He was described as medium height and build with gray eyes and gray hair.

Sometime before 1919, Arthur had moved to Duluth, Minnesota where he got another job as a miner.  I think Arthur was probably a fun guy as he like to get his picture taken and one was with a western outfit on!

In 1919, Arthur became ill and needed an appendix operation in Duluth.  Unfortunately, on May 9, 1919, he died after the operation at age 31.  The death report mistakenly listed his name as “Arlo Knihtila” but the rest of the information did match Arthur.  His brother Richard had his body transported back to Bessemer when he lived and Arthur was buried in the Knihtila plot in Hillcrest Cemetery, Bessemer on May 10th.

My grandfather Richard named his son after his brother Arthur.   My uncle, Arthur Richard Knihtila, was born on January 2, 1917.   He was the second child of Richard and his wife, Alma Tusa Knihtila.  The first child was Elma Marie Knihtila, my mother.  He and my mom grew up in Bessemer and the family attended St. Paul’s Finnish Evangelical Church in Bessemer, where both were confirmed.  He finished his first year of high school before going to work as a sawyer in a lumber camp.

On June 15, 1942, Arthur is inducted into the U. S. Army when he enlisted in Traverse City, Michigan.   While stationed in Russell, Georgia, he married Gladys Aileene Thomas and their son, James Richard Knihtila, was born on December of 1943 in Nashville, Tennessee.   Arthur spent his 1944 furlough in Bessemer with his parents before being shipped overseas to Europe.  In February of 1945, notice came to Alma and Richard that Arthur was wounded in action for the second time and was hospitalized in France for wounds received in January.  He had previously been wounded in France in July of 1944 and was sent to England for 3 months to recover before returning to action in October of 1944.  Pvt. Knihtila served with an infantry unit in the 3rd Armored Division for almost a year.

In April of 1945, Arthur is wounded for the third time in Normandy and very severely.  He was found on the battlefield left for dead but was still alive.  He had 16 machine gun bullets in his body.  He was sent to England on a C-47 Ambulance Plane and then to Scotland where they put him on a ship and he sailed for New York on the ship Queen Elizabeth. He was sent to the Hollaran General Hospital in Staten Island, New York and then to Schick’s General Hospital in Clinton, Iowa to recover.  He was awarded the Bronze Star and Purple Heart and other citations for his service to the country.  He was discharged from the Army in November of 1945.

By this time, he was divorced from his wife Gladys and returned to Bessemer to live.    Eventually, he moved to Hurley, Wisconsin, about 10 miles from Bessemer and did earn his High School Equivalency Diploma.  He worked a lot of different jobs, some in Michigan and some in Minnesota, mainly in lumber camps.  He did buy a home in Ironwood and lived in it until his death on November 17th, 1997.   Arthur was cremated according to his wishes and buried in the Knihtila plot in Hillcrest Cemetery in Bessemer, Michigan.

I regret that I only have sketches of their lives but am happy to have known my uncle Arthur!  Bless them both!