It is a new year of “52 Ancestors in 52 Weeks” with prompts each week by genealogist Amy Johnson Crow.

Last year in 2018 I fell a bit behind on weekly blogs due to our moving to a new home.  This year, I will do my best to blog something about our ancestry each week!  Our prompt for this first week of January is “First.”  I have recently started working on our Dudley ancestry – a line from Mary Lavalett Dudley, wife of Joseph Cloud Lyon, my second great-grandparents.  In my research, I wanted to determine who was the first Dudley ancestor to come to this country.

Last month I wrote about Ransom Dudley and Jency Lyon, my third great-grandparents, and parents of Mary Lavalett Dudley.   Further research brought me to the parents of Ransom (also called James Ransome Dudley) which were Robert Dudley and Clarissa Isabel Ross.  According to my sources, Robert Dudley, my fourth great-grandfather, was not the first Dudley to come to the Colonies.  I discovered he was born in Caroline County, Virginia on 30 December 1772 just before the Revolutionary War and at some time later, his family moved to Surry County, North Carolina.  Surry County is along the border of southern Virginia and northern North Carolina.  Robert Dudley  married his cousin, Clarissa Isabel Ross, in 1791 in North Carolina when they both were about 19 years old.  Clarissa was also born in Virginia and her family moved to North Carolina also.  She was the daughter of William Ross of Amherst Co., Virginia and Rachel.  There is some discrepancy whether Rachel’s surname was Fugate or Coxey.  Most sources claim her birth name as Fugate.

Robert Dudley and Clarissa had 10 children from 1792 to 1815 including James Ransome Dudley, my third great-grandfather, and their first-born child. (see Dec. blogs)  Other known children included:  Mary Dudley Boyd; William Parham Dudley; Elizabeth “Betsey” Dudley Herring; Charles Dudley; Nancy Dudley Whitaker; Clarissa “Clarry” Dudley Hodges; Judith Dudley Snow; Frances Dudley Gordon; and Celia Dudley Moore.  The Dudley children grew up in Surry Co., North Carolina but many did not stay there. About 1828, the great westward movement had begun and free government land was available for the asking.  Robert’s three sons, Ransom, William and Charles, left to move westward into new territories.  Ransom and William Dudley and their wives settled in Montgomery County, Virginia due to the hardship of traveling with young children but Charles and his family continued on to Indiana territory and later, to Illinois.  Of the daughters, Mary married Hugh Boyd and they ended up in Mooresville, Morgan Co., Indiana.  Clarry Dudley and her husband, Asa Hodges, lived in DeKalb Co., Alabama and Judith and her husband, Simpson William Snow ended up in Thurman, Fremont, Iowa.  Frances and husband, William Gordon, lived in St. Louis, Missouri!   So the family of Robert and Clarissa Dudley were scattered all over the young nation, it seems!

Indeed, Robert dared to wander and in the History of North Carolina (p. 76), mentions that after reaching manhood, Robert took his family to Georgia, but did not find that state entirely to his liking and soon returned, having made the entire round trip with wagon and team!

However, Robert and Clarissa then remained in Surry Co, North Carolina in the Mount Airy region according to U. S. Census records.  In 1800, they lived in Salisbury, Surry Co. and in 1810, they were listed as living in just Surry County.  1820 found them in Capt Farkners District of Surry and 1830 just listed Surry County.   Robert was also on the 1812 tax list for Surry County.  Robert died on 4 October 1834 and left a will. 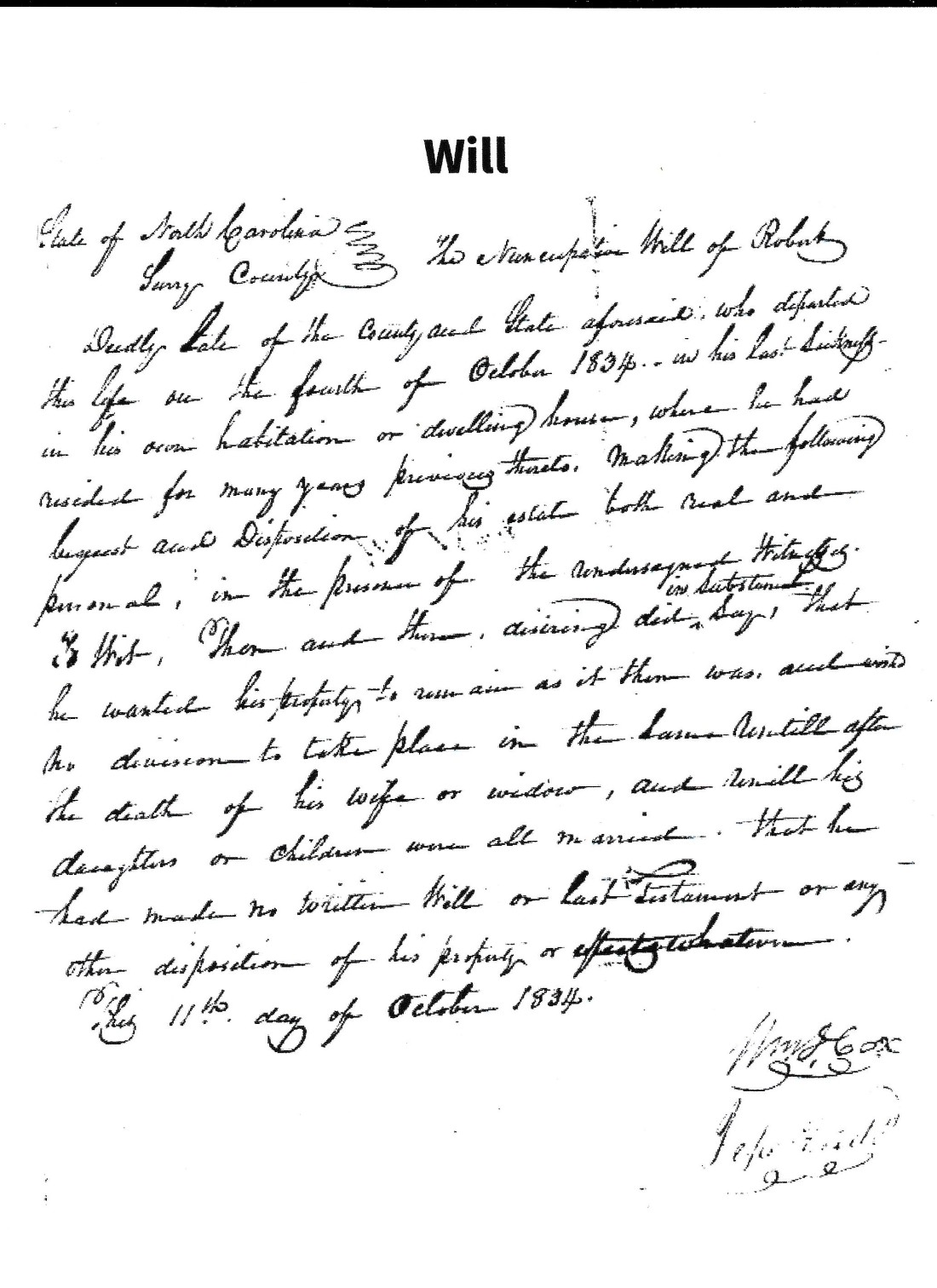 Robert stated in a nuncupative will that he wanted “his property to remain as it then was and wished no division to take place in the same until after the death of his wife or widow and until his daughters or children are all married.”    However, four years later in 1838, there was a sale of his personal estate and his widow Clarissa, age 78, was living with her daughter Betsy and son-in-law, Hardin Herring so the wishes of Robert were not carried out unless there was an agreement by his children, to dispose of his estate in this manner!

So ended the story of Robert Dudley and I found he was not the first Dudley to immigrate to the American Colonies!  Recent research has uncovered that his father, Charles Dudley may have been the first Dudley of our line to immigrate!   Charles was born 21 December of 1750 in Sedgley, Staffordshire, England and died in Surry County, North Carolina!  Next week, I plan to reveal my research into Charles Dudley and tell his story.

A Brief History of the Dudley Family, contributed by Naoma Dudley Slone, Ancestry.com.