This weeks prompt on #52ancestors is “nature” and who would be closer to nature than a farmer?  When I research ancestors in the 1800s, most of their occupations are farmers

with an occasional blacksmith, merchant or iron worker.  The wives are “keeping house” according to the census records.  This week, I would like to focus on John Thomas, a farmer, who really challenges my research skills!  For one thing, he had a common name and I had no idea that there were so many John Thomas’s out there in the records – born in every time period!  It took me a while just to determine which John Thomas was my 6th Great-grandfather but I found him and his wife, Mary Robinett.  They were parents of my 5th great-grandfather, Thomas Jefferson Thomas, who you can read about here.  Searching for “FREELOVE” 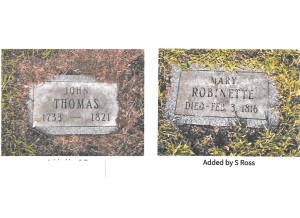 John Thomas was born on 16 October 1733 according to family Bible records which were recorded but the original Bible’s whereabouts are unknown.  John’s place of birth is not yet proven and I have found sources that list him being born in Massachusetts or Connecticut but these definitely were not our John Thomas.  Another source listed him as being born in Southampton County, Virginia.  According to the book about his grandson, “Abijah Thomas & His Octagonal House,” by Mack H Sturgill, “a thorough search of vital records and deeds of that county in the county seat at Courtland failed to reveal a trace of John Thomas and his family there.  That leaves the origin and provenance of John Thomas in limbo.” (See also: Abijah Thomas and His Octagon House)  Another story had John as a great-grandson of the orphan, also named John Thomas, who came to the Plymouth Colony at age 14 with Governor Winthrop.  There is no documentary evidence that this story is true!  In order to find more information on his birthplace, I started by researching the children of John Thomas and Mary Robinett.

Historically, the Scots-Irish were Scots, mostly farmers, who settled in Northern Ireland in the province of Ulster after 1600 to escape religious persecution under English rule.  They started migration to Virginia in 1715 and many sailed into the ports of Philadelphia and Southampton and eventually settled in the mid and southern counties of the Shenandoah Valley.  The Scots-Irish soon became the dominant culture of the Appalachians in Pennsylvania and Virginia.  This could help explain how John Thomas may have come from Pennsylvania and eventually settle in the Washington/Smyth County area on the Holston River.  John Thomas and Mary Robinett acquired quite a large tract of land along both sides of the South Fork of the Holston River in 1773.  This was part of the St. Clair Land grant is and is still known as St. Clair’s Bottom (also called Sinclairs Bottom) and was in Washington County, Virginia.  This area was first Augusta County, then Fincastle County until Washington County was formed in about 1777.  Later it became Smyth County but not until 1832.  Sinclairs Bottom was a tract of 996 acres patented by Charles Sinclair in 1753 who lived on it until the French and Indian War massacres of 1755 drove him out.

John Thomas married Mary Robinett on 26 March 1761, the daughter of Samuel Robinett and Ann Osborne.  Mary was born in 1740 in Southampton – I assume Southampton, Pennsylvania.  Mary’s gravestone indicated she was the daughter of Samuel and Samuel could have been related to an early immigrant named Alan (Allen) Robinett.  Alan came to Pennsylvania at the time of its settlement by William Penn.  According to Rootsweb, John Thomas and Mary were married in Augusta County, Virginia. (At that time, Augusta County covered a huge area from the middle of Virginia and westward.)  They started their family with two daughters, Sarah in 1762 and Martha in 1764.  Thomas was born in 1766, Mary in 1769 and, lastly, Abijah in 1776.

On March 1774, John Thomas obtained 404 acres and had the land surveyed.  It was on the north side of the South Fork of the Holston River in Sinclair Bottom.   The land adjoined the land of William Lewis who, interestingly, was also his neighbor in Loudoun County!  John was also a neighbor of Joseph and Hugh Cole who are also our ancestors!

This story gives some insight into John Thomas’s beliefs.  On 21 November 1781, our John Thomas who acknowledged himself  “indebted to the Commonwealth of Virginia in the Sum of Four Hundred Pounds Specie,” would not swear allegiance to the United States of America government most likely because of religious beliefs.  His Baptist neighbor, William Lewis and his sons who were old enough to fight in the Revolution were also found indebted to the Commonwealth for not swearing allegiance or serving in the military.  John and William Lewis were members of the Baptist church which incorporated some Quaker beliefs in pacifism and swearing allegiance “Only to God.”  Of course, the county records do not reveal why they were indebted but the Virginia Assembly did pass a law in May 1777 requiring all adult males to swear an oath of allegiance.  The penalty for not doing so was loss of the right to vote, hold office and serve on juries.  In addition, an added penalty of double taxation was passed in October of that year.  As far as I can determine from later county records, John Thomas paid his penalty and was allowed to reside in the county.

In 1792, James Cole (another ancestor of ours) sells one acre and 100 poles of land for building a new Baptist meeting house (church) in the Holston River area for just 20 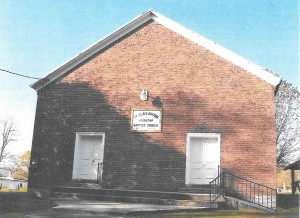 In 1795, John was able to obtain more land from the Commonwealth of Virginia on the Waters Redstone which is a tributary of the South Fork of the Holston River.  He gained 230 acres.  In 1804, their daughter Anna Thomas Martin died and in 1806, daughter Mary Thomas also died.    On 3 February 1816, John’s wife, Mary Robinett Thomas, died in Sinclair Bottom, Washington/Smyth County and she was buried in the Primitive Baptist Church Cemetery in Sinclair Bottom.  Three years later in 1819, their son Abijah Thomas died and was buried in the same cemetery.   John was not listed in the 1820 census and was possibly living with his son, Thomas Thomas and his wife, Freelove Cole Thomas.

land for one dollar out of “natural love and affection for his son.”   Also “of natural love and affection” for his grand-children and one dollar, John deeds 275 acres of the South side of the Holston River to Sally Allen, John Thomas, Polly Thomas, Betsey Thomas, Martha Thomas, Sam Thomas, Anna Thomas and David Thomas who are all children of his deceased son Abijah Thomas.

On 9 July 1821, John Thomas died in Sinclair Bottom, Washington/Smyth County, Virginia and he is laid to rest next to his wife, Mary, in the Primitive Baptist Church Cemetery.

3 thoughts on “Where did you come from, John Thomas?”