I would like to share the story I discovered about the oldest ancestor I found so far.  James Marshall Burch was the son of Stephen Burch and Elizabeth McDaniel, my third great-grandparents, who I wrote about in the last post, and James lived to 102!  James was my third great-uncle.   Now I was amazed to find an ancestor who lived so long and knew I had to find our more of his story!

The mystery was solved when I found his three page application for pension documents that was completed in his own handwriting in 1908 and stored in the Library of Virginia.  In a sworn statement, he listed his age as 77 which would make him 102 in 1933 at the time of his death!  The document was witnessed by two comrades from his unit and signed by his physician.  The oath was administered by the Amherst County Circuit Court judge making the affidavit irrefutable proof of his actual age of 77 in 1908.  So he really did live to 102!

His wife, Bettie Elizabeth Coleman was the daughter of Hugh Nelson Coleman and Mary J Christian.  Bettie was born 15 Mar 1850 in Amherst County VA and when she married 34 year old James Marshall Burch, she was 15 years old.  James worked at various places throughout their marriage including the N&W Railway, the Southern Railway (15 years) and the C&O Railroad (9 years).  He once worked for the Lynchburg Transit Company as a driver for the first horse drawn Trolley.  A picture of a horse drawn trolley is above but that is not James – just an example of an interesting occupation!

Before he married, the Civil War had begun in 1861 and James Marshall enlisted with his older brother, Fielding Burch and younger brother, Milton Burch, in Company G, 51st Virginia Regiment, CSA, under Captain Henley and General Gabriel C Wharton.  The three brothers along with their brother-in-law, George Moon (who was married to their sister Caroline) all enlisted on the same day, 29 Jun 1861, hoping to stay together.   James was in 25 engagements and wounded five times and was captured and escaped several times during his tour of duty.  He participated in the Virginia Peninsula Campaign, Virginia Valley Campaign, Battle of Richmond, Petersburg, eastern Tennessee and the Battle of Manassas.   He applied for his pension in 1908 at age 77 and was proud of his service.  He attended all the Confederate functions and received a lot of attention.  He was a member of the Garland-Rhodes Camp and served as dignitary in post-war celebrations for years receiving military honors at his death.  He was presented an elaborate and ornate walking cane by the U. S. Ambassador from Mexico.  When James passed away, he was buried in his Confederate uniform as he wished.

Bettie Burch, his wife, died 19 March 1924 at the home of her daughter, Carrie Lavinia Burch Costan, 1301 Floyd Street, Lynchburg.  Bettie had been an invalid for six years and her death at age 74 was due pulmonary tuberculosis.  She was a member of St. Paul’s Episcopal Church and operated a guest house in Big Island, VA.  One family story claims she once set her pillow on fire from smoking her petit pipe in bed!

James lived with his daughter  Carrie Costan at 1301 Floyd St during his last years and had an upstairs room.  Family story has it that “he was an early riser and demanded a big breakfast of eggs, pork and fried potatoes.  He made noise until someone would get up and fix his breakfast.  Lunches were served promptly at twelve noon and dinner precisely at five o’clock.  He enjoyed a snort each night before bedtime.  His grandson, ‘little John’ (John Percy Burch), would sneak a bottle of booze to his room.  His granddaughter, Kalypso, who lived there said he could ‘really spin a yarn.’   She recalls his telling that he was beside General Thomas C ‘Stonewall’ Jackson when the general was shot.  Once while hunting in Bedford County, James Marshall was late or dinner.  A search party was organized and found him ‘lost’ in the woods.  He would never admit to being lost but was grateful for their efforts to bring him home.  She said that reporters often tried to trick him about his age to see if they could catch him in a lie.  They always got the same number regardless of the manner in which the question was posed.”

Kalypso, his granddaughter, also revealed that her grandfather would “walk downtown and ride the trolley home using his pass.  He would often sit in front of Schewel’s at 11th and Main Streets and watch the women.  When he returned home he would exclaim at the shortness of the lady’s dresses bearing their feet.”  James was a member of the College Hill Baptist Church and affiliated with Fairview Christian Church where he was baptized at age 100 years.

This wonderful character named James Marshall Burch died at the home on Floyd Street on 25 February 1933 at age 102.  The cause of death was listed as senility.  He was laid to rest in Spring Hill Cemetery in Lynchburg next to his wife Bettie. 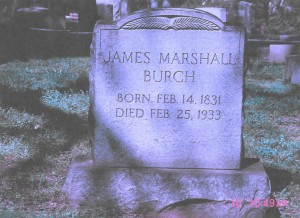