In my research of ancestors in the 1700s and 1800s, it seems prosperity meant owning land – and the more land, the better!   Land for production of wealth and providing a living was of immense importance.   Everything we use and our ancestors used can be ultimately traced to land.  Land, for many of my ancestors, could be called the original source of material wealth.   They may have forgotten to register the births of some of their children but always recorded their land transactions!  Some ancestors were able to amass large tracts of land and some didn’t.  This week, I am particularly thinking about my fifth great-grandparents, Spencer James and Frances Davis James.  They started out with little and bought a land here and there until they accumulated a legacy to pass on to their heirs. 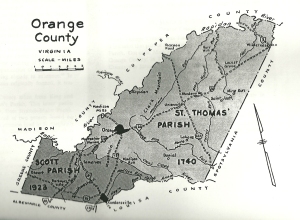 Spencer James was really named “James Spencer James” but used the name “Spencer James” in most records.  He was born about 1750 in Orange County, Virginia and lived in St. Thomas Parish.  He was the son of Samuel James and Mildred Taliaferro.  He married Frances Davis on 22 August 1780 in Orange County.  Frances was the daughter of James Davis, an English Immigrant, and Catherine Samuel, the widow of Henry Samuel.  James Davis and Catherine married in 1752 and Frances was born about 1753. 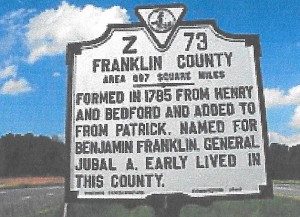 Two years after their marriage, Spencer was listed on the Orange Co. VA tax lists in 1782  where he paid taxes on 7 horses, and 4 cattle.  The next year, they moved to Henry County, Virginia and paid taxes on one horse and two slaves in 1783.  That part of Henry County later became Franklin County.  Now this didn’t seem like they had much to start off with but on 3 October 1796, Spencer received a grant of 120 acres on Runnett Bag Creek and Smith River in Franklin County.  The Creek and Smith River are outlined on the map below.

Then in December of 1797, he bought 200 more acres on Smith River for just 100 pounds and 20 more acres on Nicholas Creek.  This was just the beginning of his land deals as he bought another 300 acres in 1809 from a future son-in-law, Waddy Thompson.

He sold 100 acres and 30 acres on Nicholas creek at a profit in 1801 and 1803 and continued buying more land.   By 1811, Spencer and Frances had amassed more than 1400 acres!   They had created a prosperous legacy to leave for their children.  They had eight known children with the last child being born in about 1799.  One son, Catlett James served in the Revolutionary War in the 1st and 10th Virginia Regiments.   The daughter, Mildred James, married Jerman Baker who was later a member of the Virginia Legislature in 1813.   Another daughter, Frances Baker James, married Ezekiel James and they were my fifth great-grandparents.  A younger daughter, Phoebe Byrd James who I wrote about before, married Chesley Ashlin and they were my fourth great-grandparents!  The youngest daughter, Elizabeth Booker James married William James who was known for making some of the best corn liquor in Smyth County!

Frances Davis James died in 1814 at about age61 or 62 but Spencer  lived until age 84 and died 22 February 1834 in Franklin County, Virginia.  Their burial places are unknown.  You can find stories of their children that I have written on the following links: