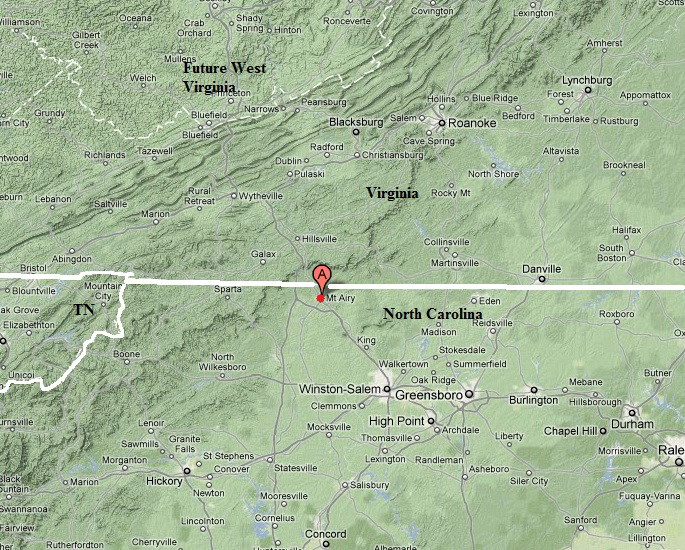 Mount Airy, North Carolina has a couple “claims to fame.”  For one, it was the birthplace and hometown of actor Andy Griffith.  In his television show, the town of Mayberry was inspired by this town of Mount Airy nestled in the foothills of the Blue Ridge Mountains.  Another fact about the town is that it was the residence of Chang and Eng Bunker, the famed conjoined “Siamese Twins” who are buried just two miles from the main street.   Many of their descendants live in the area today.  In fact, the 200 acres of land acquired by Chang and Eng were previously owned by my ancestor and fifth great grandfather, Charles Dudley, in 1782!  (So very interesting!)

When I saw the prompt “Air,” I immediately thought of my ancestral Dudley Family who settled in Mount Airy, Surry County, North Carolina!  Charles Dudley and Robert Dudley, in particular, raised their families in that area.  Charles and Robert were originally from Caroline County, Virginia where Robert was born on 30 December 1772.   He was the son of Charles and Mary Dulyin.   Luckily, I can confirm Robert’s birth date as it was mentioned in his father’s Anglican Church Prayer Book and Psalms!   That was a great find, especially from the 1700s!

Before 1777, the Charles Dudley family moved to Surry County, North Carolina, just 3 miles south of the Virginia border, where Charles had received several land grants.  During the mid-to-late 1700s, the availability of land in North Carolina drew thousands of settlers from Virginia, Pennsylvania, and Maryland.  The process of patenting land in North Carolina was not really hard.  Anyone wanting to patent land just submitted an application or land entry to the land office and the land officer then issued a warrant. Surveyors surveyed the land and sketched a plat or map of the land claim which was filed in the land office or, after 1777, recorded by the county register of deeds.  Then the land patent was issued and recorded!

Charles Dudley’s first land grant Warrant of Survey is dated Nov. 21, 1777 in Surry County.  Three other grants at various dates were issued to him totaling about 1000 acres. Some of this land was on the Ararat River in Surry County and this is the river that flows through Mount Airy.  I am really puzzled as to the parentage of Charles.  One source claims he was the son of a wealthy nobleman in England but he ran away to seek adventure and went with a neighbor to America.  He established himself as a sort of sporting English Squire on his land and was a hospitable man who loved fast horses. You can read more about Charles in my post The Challenge of Finding Charles Dudley

Charles’ son Robert married a cousin named Clarissa Ross in about 1791 in North Carolina.  Clarissa was the daughter of Captain William Ross of Amherst County, VA and Rachel Coxey or Rachel Fugate (conflicting sources – needs more research!)  Clarissa’s family had also taken advantage of the land warrants offers in North Carolina.  Robert and Clarissa were both 19 when they married and went on to have ten children.  Their firstborn child was James Ransom Dudley, my third great-grandfather.  Robert and Clarissa did have their farm on Stuart Creek (Stewart’s Creek).  I found Robert’s name on the 1812 tax list for Surry County and, according to census records, they remained in the Mount Airy region.

The important thing to note in the will is that he wished “his property to remain as it then was and wished no division take place in the same until after the death of his wife or widow and until his daughters or children are all married.”   However, four years later in 1828, there was a sale of his personal estate and his widow Clarissa was living with her daughter Betsy and son-in-law, Hardin Herring, so the wishes of Robert were not carried out as he stated in his will.   Perhaps there was an agreement by his children and widow to dispose of his estate in this manner.   Clarissa Dudley lived until 1860.  It is quite possible that they both were buried in the Herring-Dudley Cemetery in Mount Airy, North Carolina.