James Robert Porter was born in 1699 in Coleraine or Londonderry County, Province of Ulster, Ireland and was the son of Josia Porter and Margaret Ewing, who both were born and died in Ireland.   It is believed that James immigrated to Maryland, the British American Colony in 1727 with his uncle, Alexander Ewing ahead of his wife, Eleanor Gillespie Porter and the older children.  The Porters, Ewings, and Gillespie’s were close neighbors in Ireland and in Maryland and intermarried.  Eleanor, wife of James, and their older children including Andrew,  are thought to have immigrated with her parents from Ireland.  The very earlier Ewing clan was banned, as protestants, in a religious war and were forced to immigrate from Scotland to Ireland after being defeated in battle.  Many of the Ewings ended up going to the colony of Maryland and residing in Cecil County.

James Porter did fairly well upon settling in his new land as witnessed by his will.  His will was recorded around 1778 so he died prior to that year.  Unusual as it seems, his will was recorded in the Cecil County, Maryland will books and also recorded in Lancaster County, Pennsylvania will books.  Perhaps because the two locations abutted each other and he owned land in both Maryland and Pennsylvania.  From his will, I was able to verify his wife was indeed named Eleanor (spelled Elianor in the will) and that he did have a son named Andrew among other children.  The will describes his land near the Ewings so evidentially they were indeed neighbors.  He left his wife the land they lived on, of course, but with the stipulation that  she was prohibited from “committing any waste or cutting any Wood save what may be necessary for Rails and firewood.”   This was an interesting addition to a will I had not seen before!

He left his sons William and Andrew land, houses and buildings in the “Peach Bottom” that were in Maryland and Pennsylvania that included the saw mill dam, races, and ferry.  James also left his silver watch to son William.  James’ wife also got 100 pounds of Pennsylvania Currency and her choice of one cow, horse or mare out of his stock.  Other children mentioned in the will included sons Stephen, James, Samuel, George who all received lands and daughters Elianor, Mary, and Elizabeth who were provided with sums of money.   From the will, we see he had at least 9 children, 6 sons and 3 daughters.  One source also mentions another daughter named Jane Porter who married Patrick Ewing and Jane died in 1784.  However, this is not yet verified and, if she was James’ daughter, she may have died sooner as she was not noted in the will.

James and Eleanor Porter’s son, Andrew Porter, my 7th great-grandfather, was born in 1720 in the county of Donegal, Ulster Province, Ireland.  His parents were James Robert Porter and Eleanor Gillespie.  Andrew Porter, our immigrant from Ireland, married Eleanor Ewing who was born in 1721 in the province of Ulster, Ireland and also immigrated to Maryland Colony.  Her parents were Alexander Ewing and Rebeckah.  Alexander and Rebeckah also immigrated to Maryland and Alexander’s will named Andrew Porter as a son-in-law.   Eleanor Ewing and Andrew Porter were married about 1738, I believe in Cecil County of the British Colony of Maryland as Eleanor died before 1740 in Maryland.  It is possible that she died in child birth or a short time after their son Robert Porter was born.  This Robert Porter, born about 1738-39,  became my 6th great-grandfather and fought in the Revolutionary War.

After his first wife’s death, Andrew then married Margaret Leiper and, by examination of his will, it is found that Andrew and Margaret had a son named James Leiper Porter and 5 daughters named Mary, Margaret, Elizabeth, Elinor and Catherine.  In his will, he also left money to his grandson, Andrew Porter (my 5th great-grandfather), son of his deceased son Robert from his first marriage.

There is an interesting fact about Andrew Porter, the immigrant.   I have a copy of a document granting him land in the county of Wythe, Virginia that was signed by James Monroe in 1798, then Governor of Virginia, and later the fifth President of United States!  The document is difficult to read but Andrew’s name is on it and it is signed by James Monroe! 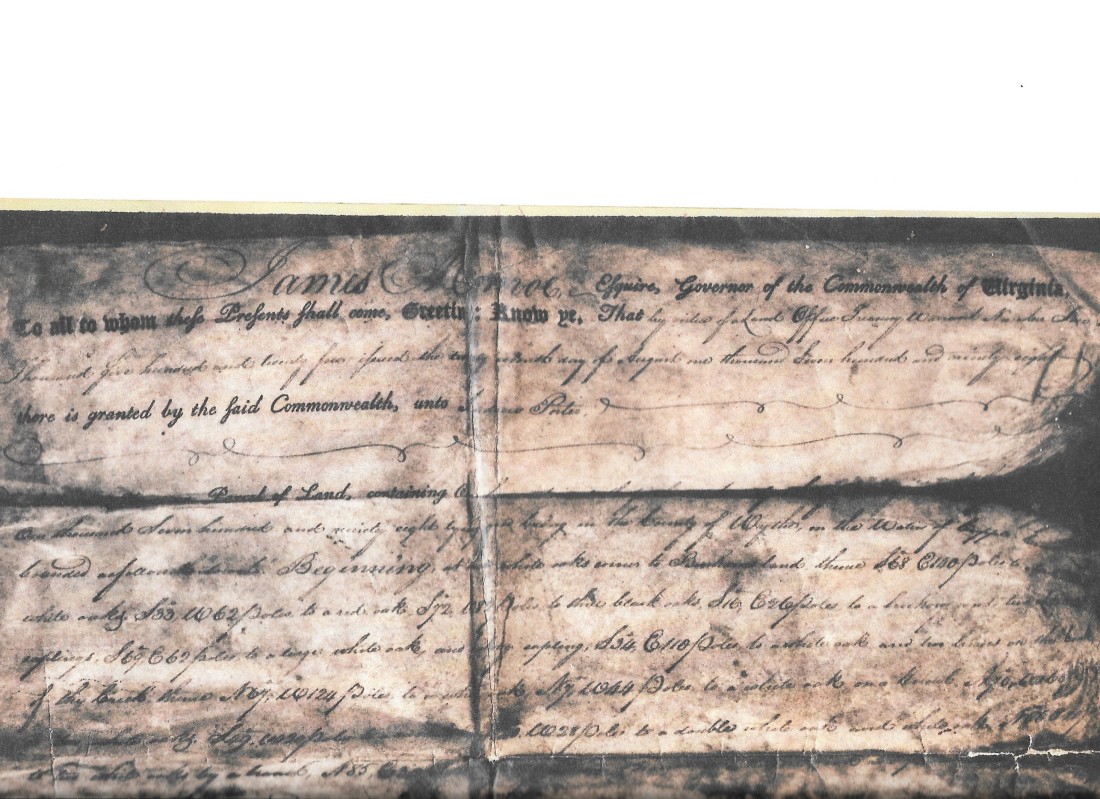 This land in Wythe County was later owned by Andrew Porter’s grandson, also named Andrew Porter, who was born 1773 and was my 5th great-grandfather.   Whether this land grant was a bounty for serving in the Revolutionary War is uncertain although Andrew could have served even if he was in his mid-fifties.  Clearly more research is needed to establish if he served.   His son, Robert S. Porter did serve in the Revolutionary War and is a DAR ancestor.  His story is coming in future blogs!

Will of James Porter, recorded in Lancaster County, Pennsylvania: Will Book E; Pages: 299-301.

3 thoughts on “Irish Ancestors and Immigrants!”