For week 14 of #52Ancestors, the prompt is “brick wall.”  In genealogy, a brick wall is when you can’t find any records or information on an ancestor and can’t research further – just like “hitting a brick wall!”  I have encountered quite a few in my research but I am going to stretch the theme this week to write about an ancestor who worked in a foundry – a foundry that made bricks and cast iron parts!

To start at the beginning, this is a lovely picture of Cora Virginia Phillips, my great grandmother – the mother of my paternal grandmother, Cammie Lyster Swanson Lyons.  Cora married William Domman Swanson on 24 July 1884 in Amherst County, Virginia.  You can find the story of William’s tragic death here.  A Fireman’s Story: My great-grandfather.

Cora was the daughter of Oscar Fitzallen Phillips and Nancy Jane Burch, my second great-grandparents.  As I was researching, I did stumble upon another Oscar Phillips in the family and he was Oscar Stephens Phillips, a cousin, who married Pearl May Swanson, the daughter of William and Cora  Swanson.  Confused yet?  I was at first, too!  Oscar Stephens Phillips married my grandmother’s sister, Pearl.  We’ll just call him “Oscar S” as he will come up later in this story.  But let’s get back to Oscar Fitzallen and Nancy Jane.

Oscar Fitzallen Phillips was born 11 December 1832 in the town of Amherst, Amherst County, Virginia.  He was the son of Captain Benjamin Allen Phillips and Mary Nicholas Cazey (Casey) and was their 8th and last child.  His father, Capt. Benjamin Phillips was a veteran of the War of 1812 and was born in 1777 during the Revolutionary War in Henrico Co., Virginia.  Benjamin was a carpenter by trade and they lived in Lynchburg, VA.  The 1850 Census for this family showed that their son Oscar was 18 and was working as a “moulder” – a trade he will follow through his life.  A moulder made molds for cast iron parts or for bricks in a foundry by pouring the molten iron into molds and removing them when the iron has hardened – heavy and hot work!   Oscar’s brother, Benjamin S, was a “plaisterer” which is an old spelling of plasterer.  Capt. Phillips died 11 March 1863 in Amherst Co. and Mary Nicholas Cazey Phillips was born in 1795 and died 17 May 1857 in Lynchburg, VA.   Mary Cazey is one of my brick walls I need to work on!

The 1850 Census naming Nancy Jane Burch who was to marry Oscar Fitzallen Phillips is the first record I found of her.  She was the daughter of Stephen Burch and Elizabeth Miller McDaniel – or was the last name Miller or was Elizabeth a widow?  See what I mean about brick walls!  Clearly, more research is ahead for this family.

On the 10th of December of 1852, the marriage bonds for Oscar and Nancy were published with the bondsman being her father, Stephen Burch.  They were married on Christmas Day in 1852 when Nancy was but 16 years old and Oscar was 20.  By time Nancy was 20 years old, their first children were born – twins!- in October of 1856.  They named them Millard Fillmore Phillips and Mildred Frances Phillips (Millard and Mildred – how charming!)  Millard was noted in the 1870 Census but Mildred, or Millie as she was called, was not so it can be assumed that she may have died before 1870.  I could find no record that she had married or of her death.  Millard became paralyzed between 1870 and 1880 according to the census.  He was working as a farm hand in 1870 and paralyzed by 1880.  Millard lived with his parents until his death sometime before 1910.  Cause of the paralysis is unknown but could have been an accident or disease.

The twins were the first children of 17 known children – yes, 17 children- and my great-grandmother, Cora Phillips, was the eighth child.  The 1860 Census give little information about Oscar and Nancy’s family except that Oscar was a Grocer at the time and they had 3 children.  The value of their real estate was $200 and personal estate was $1000.  That would be about $6300 and $32,000 in today’s values.  The Civil War started a year later and affected everyone in the country as well as in Virginia where many of the battles were fought.  Nancy was 23 and Oscar was 26 when the Civil War started.  In searching Confederate files, I did find 3 records for an “O. Phillips” or “Oscar Phillips” but the records did not contain enough information to verify that this was our Oscar who served although it is likely to have been him as he was of age to serve.

After the war Oscar is again working as a moulder in a foundry for the next 20 years in Amherst.   The Lynchburg, Virginia City directory of 1875 listed him as a moulder at the Phoenix Foundry and living in Amherst (near Lynchburg VA). 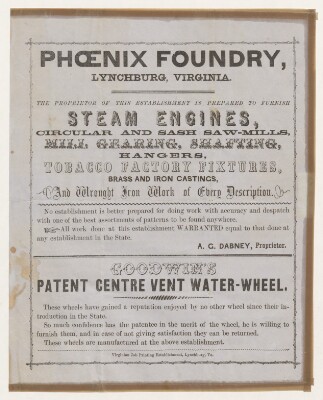 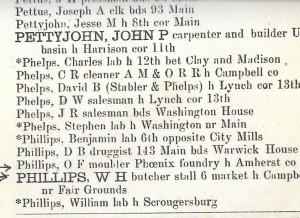 Nancy bore their last child Julia May Phillips in 1880 at age 44 or age 45.   Nancy bore 17  children in a span of about 25 years!  I found this information in the 1900 Census records where they listed the number of children born as 17 and the number of children living as 12.  I have only found 15 of the children so 2 may have died young between census records or at birth.  Oscar’s occupation is again listed as Iron Moulder and they owned their home and carried a mortgage.  Their paralyzed son Millard lived with them along with son Robert O, age 41, who is a locomotive overhauler; a daughter Alice, 30; Hubert F, 21, a cove maker in a pipe factory; and Julia, age 19.  This was a family who worked in the trades!

In 1910, their home is in the Madison Heights Village, Elon District, Amherst Co and Oscar is now 78 and Nancy is 74.  At 78, Oscar is still working as a moulder in a foundry and their son, Robert is a farmer running a truck farm.  Their son Hubert is 28 and a mail carrier for the Post Office.  About 1911, Nancy passed away although the exact date is not yet verified.  Oscar Fitzallen died at age 81 in Madison Heights of heart disease.

I can’t imagine my great-grandmother, Cora, growing up in a family of 17 children – there probably was never a dull moment!  I admire Oscar and Nancy for providing for and caring for such a large family!  Here’s a brief list of what I know about 15 of the Phillips children, siblings of Cora.

6 thoughts on “A Family of Phillips!”