This week, I want to add to the Porter ancestry stemming from Scotch-Irish roots.  Most of the Porters settled in the Cripple Creek area of Wythe County, Virginia.  (see the posts Irish Ancestors and Immigrants! )  The first Porter immigrants from Donegal, Ulster, Ireland were James Robert Porter and his son Andrew Porter.  The son of Andrew was Capt. Robert S Porter who married Margaret Lindsay Ewing about 1745 in the Virginia Colony.  They were my 6th great-grandparents.  Their son, named Andrew Porter Sr. after his grandfather,  was to become my 5th great-grandfather.  An interesting note about another son of theirs – William Porter, who was born about 1775, died on 13 October 1817 on the ship “Congress”  while in the U. S. Navy, during the War of 1812.

Andrew Porter Sr. was born 4 Apr 1773 in Wythe County, Virginia according to most sources.  However, one source places his birth in Fincastle, Botetourt County, VA.  Andrew married Martha Mary “Polly” Gleaves in 1792 in Wythe County VA.  Andrew would have been about 19 and Martha about 18 at the time of their marriage.  Martha Mary Gleaves was born 13 Dec 1774 and  was the daughter of William Gleaves, a Revolutionary War soldier and patriot, and Elizabeth Turk.  William served in Capt. Thomas Hamilton’s Company, the 1st Virginia Regulars.   Elizabeth was also the sister of Major James Gleaves of Wythe County.  Sounds like a lot of history to research in the Gleaves family!

However, Martha died 11 Nov 1832 and in 1834, two years later, Andrew remarried to Mary Bralley or Brawley who was about 20 years younger than himself.   I found a widow’s pension application made by Mary for Andrew’s service in the War of 1812 so he evidentially did serve in the war.  By 1840, Andrew and his new wife had a total of 13 slaves but the 1850 Slave Schedule showed only 3 slaves.  Andrew was about 77 in 1850 and his wife Mary was 57.

During his lifetime, Andrew had amassed a lot of acreage.  Some of the land records showed acquisitions of 600 acres on Cripple Creek in 1772 and 86 more acres won in a land dispute.  In his will he conveyed to his son, Andrew Porter Jr., land on the south side of the New River which he had inherited from his own father Robert plus land in Blount County, Tennessee!  In 1833, Andrew Sr.conveyed to Stephen Porter, his youngest son, the land on which Andrew lived along with several tracts adjoining it, about 1,000 acres in all!

Andrew Porter Sr. died in 1853 at age 79  and was buried in the Porter Family Cemetery in Speedwell, Wythe County.  He was buried next to his first wife, Martha Mary Gleaves Porter.

Two of the daughters of Andrew Sr. and Martha actually married two brothers from the Scott family and one of the sons married a Scott sister!  So there were three Porter-Scott intermarriages in the family – it must have made family reunions very interesting!   And were their children first cousins and nieces and nephews?  All of the above!  Elizabeth “Betsey” Porter , born 1794, married Esquire William Scott and Margaret “Peggy ” Porter, the sister born 1795, married John Scott, William’s brother.  Later,  Capt. James F Porter, born 1803, brother to Betsey and Peggy Porter, married Elizabeth Scott, the sister of William and John Scott.  Capt. James Porter, a farmer, died in Lawrence Co., Pennsylvania at age 50 of paralysis.

I found out that the Scott brothers and Elizabeth were children of James Scott and Rachel Holmes.  James Scott was from Ireland and Rachel was of the nobility of Scotland.  There was so much opposition and displeasure with her family that James Scott and his wife emigrated to America and settled in Rye Valley, near Blue Springs, VA (now in Smyth Co. VA) 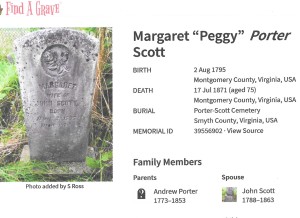 Another daughter of Andrew Sr and Martha was Mary “Polly” Porter, born 1797, who was married twice.  First she married Stephen Gose, who died in 1824, and then married David Jones Pickle.  A picture of the Stephen Gose home is below. 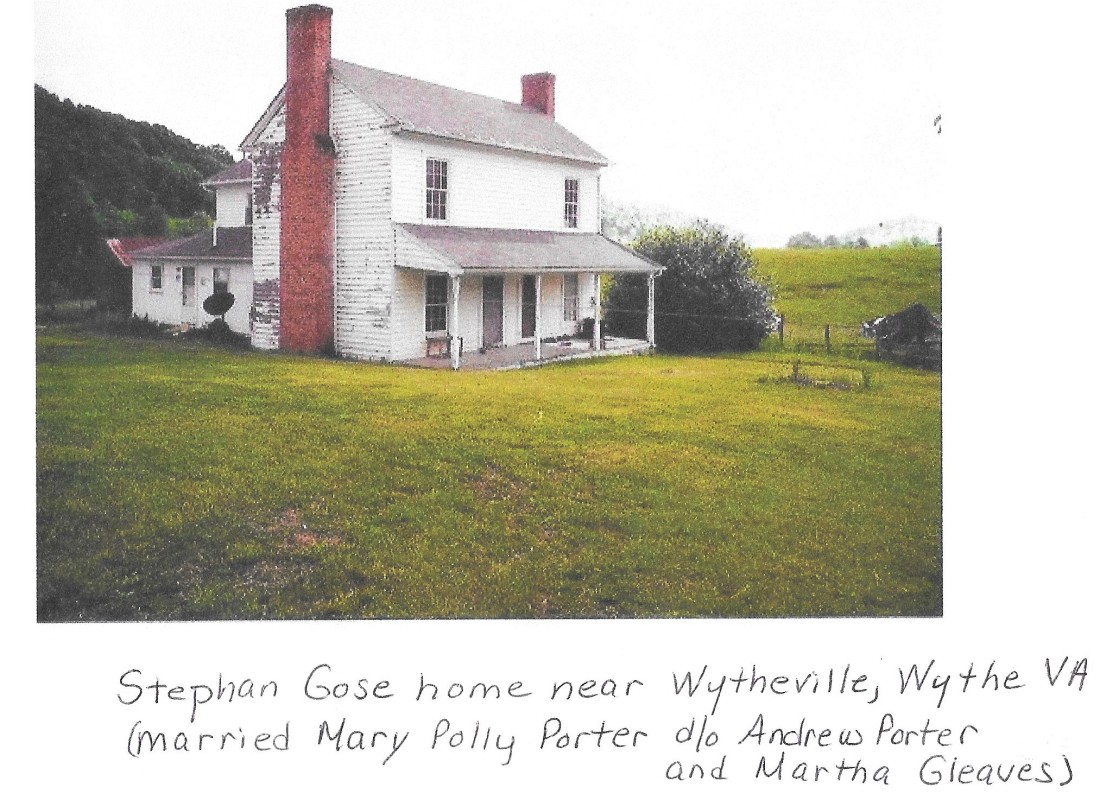 William Porter, Jr, son of Andrew Sr and Martha, was my 4th great-grandfather, born 1799 and died 1867 at the age of 67.  He married my 4th great-grandmother, Mary Polly Thomas, daughter of Thomas Jefferson Thomas and Freelove Cole.  You can read about them here: Searching for “FREELOVE”   William and Mary Polly Thomas was the parents of Susannah J Porter, my 3rd great-grandmother.   For more information on Susannah, read: Portrait of a Strong Woman. 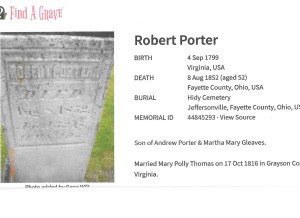 Another son, Robert Porter, born 1799, married a Mary Polly Thomas also but this was from a different Thomas family as far as I could determine.  This Mary was the daughter of Moses Thomas and Catherine Williams.  They settled in Ohio.

Andrew Sr. and Martha did have 3 more children including Andrew Jr. in 1805 who died in 1850 at age 45.  Daughter Sarah Gleaves “Sally” Porter was born in 1808 and married Henry Michael  and they moved to Greene Co., Ohio.  Sarah died in 1860 at age 52. The youngest son, Stephen D Porter was born in 1813, married Margaret McNutt, and died in 1883 at age 70.  This was the only information I could find on these last three children.

The Porter Family was an interesting research and I feel fortunate to find some valuable information on them!  I hope you enjoyed the posts!